$100,000 in Cash Prizes!
Travel to an Exciting Destination!
(Not to mention Fame and Glory!)

NCsoft and ArenaNet are pleased to announce the Guild Wars World Championship.

The qualifying season began at Midnight Pacific Daylight Time (7:00 AM GMT) on Saturday, October 1st, as ArenaNet reset the Guild Wars ladder. The ladder season lasted three months, and led to playoffs among top-ranked guilds in three regions: America, Europe, and Korea. Many guilds from each region participated in the Guild Wars Regional Playoffs, which took place January 7 — January 14, 2006. The top two guilds in each region — the Regional Playoff Champion and 1st Runner-Up —then sent an eight-player team to battle for Guild Wars world supremacy in Taipei, Taiwan, during the week of the Taipei Game Show, which is scheduled to take place February 16 — 20, 2006.

The following guilds will be competing in a single elimination tournament for the Guild Wars World Championship title in Taipei, Taiwan.

ArenaNet is providing cash prizes for the winning guilds of the Guild Wars World Championship, which will be divided pro rata to their players, as follows:

The finals of the 2006 Guild Wars World Championship will take place on stage at the Taipei Game Show, which runs February 16 — 20, 2006. Who will win? Will it be one of the fantastic Korean guilds? A guild from Europe, ably represented by two (count 'em, two!) guilds from Finland? Or will an American guild claim the prize, with players from as far and wide as the United States, Canada, and Brazil? Only time will tell who will be crowned as the 2006 Guild Wars World Champion!

But the heat doesn’t end there.

NCTaiwan and ArenaNet are pleased to provide the details of another exciting PvP event: The Taipei Challenge. The qualifying season for this event began with the start of the Taiwanese Closed Beta Test back in December. To this day, guilds have proved their excellence with well-fought matches displaying outstanding competitive style. After the official release of Guild Wars in Taiwan on February 7th, the top two guilds from the Taiwan ladder will be invited to the Taipei Game Show to compete for the Taiwan Regional Champion title on February 19th. And that guild — the best in Taiwan — will be challenging the 2006 Guild Wars World Champion to an exhibition match. What’s on the line for the Taiwan team? A cash prize of $10,000 provided by NCTaiwan if they win! What’s on the line for the Guild Wars World Champion guild? Pride, honor, and a prize package that is the stuff of any gamer's dreams!

And remember, you can catch the action in Guild Wars via Observer Mode!

A full set of rules for the Guild Wars World Championship can be found on this link and Ladder Bracket Rules are on this link. In addition, the Universal Guild Wars Tournament Rules set can be found here. In these documents you will learn about eligibility, the provisions for participation, the releases required to participate, and about gameplay rules, as well. Each of these rules documents applies to the Guild Wars World Championship, and participants in the event should make it a point to read and follow all the rules carefully. 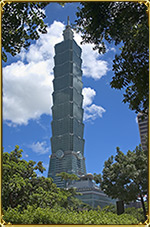 Taiwan is a solitary island off the coast of Mainland China, on the western edge of the Pacific "Rim of Fire." Taiwan's landscape features majestic peaks, rolling hills and plains, basins, rugged coastlines, and other wonders. A land of great natural beauty, the small island is home to 6 national parks and 12 national scenic areas and has climates ranging from temperate to tropical. There are nearly 20,000 species of wildlife on the island, and more than 20% are Rare or Endangered Species.

The cultural aspects in Taiwan are a delighted blending of Hakka, Taiwanese, and mainland Chinese cultures. These lend a fascinating cultural and social color to everything from architecture to language to food.