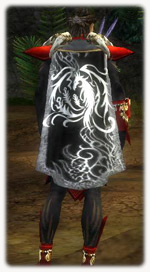 DeeR sprang from the ashes of a disbanding guild. Even though the original incarnation of the guild, Rank Three Plus Pug, was fading, not all of its members were willing to let a good thing go. They reformed the guild with the name Slash Rank [DeeR] and have been running strong ever since.

With the goal of becoming a high level GvG force while still finding time for playing Heroes' Ascent, DeeR found success using spike builds against their opponents. They earned a silver cape trim in more than one season. Although the guild stands by its use of the spike build, DeeR has been moving towards more balanced builds. DeeR remains proud of its roots and keeps the spike build as a tactic and trump card in playoffs, but is willing to move with the times as the game evolves.

DeeR does not actively recruit. Rather, they only add people to the roster once they've proven themselves to be a positive addition to the team. During off-seasons, when the focus of play becomes more lighthearted for the team, they sometimes accept non-PvP players. However, the guild sticks to a core of about ten players and favorite guests.

Very few members of the guild focus on PvE as a primary element of the game. Those who do, generally stick to farming or creating characters they eventually use for PvP. Over time, however, almost all of DeeR have been able to attain several sets of ascended and high-end armor for their characters. Don't mistake their lack of interest for a lack of talent or determination!

In the past, DeeR was well known for its use of a Ranger-spike build that incorporated an Orders Necromancer to help cover Enchantments on the team's softer targets. The tactic allowed for massive damage and split-team strategies, which suited the meta-game of the time. Later, the guild switched to an Obsidian Flame spike to overwhelm even the most lightning-fast healing.

Ventrilo is key to DeeR's successful use of spiking. However, it's not the most important factor for victory. DeeR suggests that up-and-coming teams learn to pay close attention to what their opponents are running. For example, if Hex builds are popular, then it's imperative to bring several Hex removal skills.

DeeR also advises perseverance in the face of adversity. If you find yourself confronted by a team your guild isn't prepared to handle, don't give up. Make use of the skills you have and try every type of tactic before throwing in the towel. Overconfident enemies often make mistakes. If the situation is truly dire, DeeR suggests going for a team gank. It might cause the enemy to panic, buying valuable time with which to salvage the match.

The guild generally focuses on GvG, though this season, DeeR has turned its eye back to HA to get members the rest of the way to ranks 11 and 12. DeeR prefers GvG because they find the combat much more satisfying. The tactics require more depth than HA, and an almost infinite amount of situations can arise in GvG combat.

Depending on the build DeeR is playing, the guild uses different halls. Before the guild thieves were removed from the Imperial Isle it had been a favorite map for Ranger Spike tactics. The open and straightforward arena allowed for a quick and easy victory. More recently, however, DeeR has found both the Burning Isle and Isle of the Jade to be appealing.

As for advice to higher ranked guilds, DeeR has this to say: "Never be afraid to learn from a lower ranked guild." Illusions of Grandeur first used this build against DeeR in a rated GvG match. Impressed, DeeR used it the next day in round four of the Autumn Season Tournament. After making some modifications, they found success with the build. Once eliminated from future rounds of the tournament, DeeR decided to give the build a shot in its last match-up. It turned out to be the perfect counter for what others had been running against them.

Here is the Ritualist Build that DeeR took for a spin after seeing it find unexpected success in tournament play:

The build also utilizes a two-Monk back line and an Elementalist/Monk flag runner. However, the skills DeeR uses for these roles varies as the metagame changes.

The trick to the build is to constantly build up Spirits and spread damage around randomly. This helps prevent the enemy Monks from guessing who to pre-protect. The result is a slow, but inexorable, rise in pressure.

Whenever possible, the Warriors need to call adrenaline spikes on weakened targets in order to rack up quick kills. The brief recharge of offensive Ritualist spells means they can help spike, creating sudden bursts of lethal damage.

Defensively, this build can use Feast of Souls to counter Health degeneration-centric teams. Two copies of Expel Hexes slows down Hex-wielding teams, and two copies of Mend Body and Soul, when combined with the large amounts of Ritualist Spirits, can stop Condition teams as well. The only problem with this build is that it can be difficult to build up pressure after suffering a forced fallback. If the other team retreats far enough and has a chance to recover, it can also become difficult to keep them pressured.