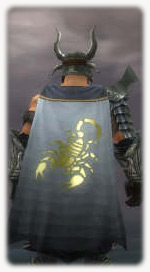 In September of 2006, the Electronic Empire [eE] was founded by The Hero You Hate as a Heroes' Ascent guild. Currently, this tight group of twelve experienced players, most of whom are rank 9 or higher on the Hero Title Track, prefer Guild Battles because of its more concrete results as reflected in the guild rating and ladder rank. Their focus on GvG has driven them to become an established guild on the ladder, consistently hovering among the top 100.

The Electronic Empire began its career with a Ritualist Spike build for Heroes' Ascent, even though they assumed at the time that it probably wouldn't work because pressure teams would easily overcome them. While this is exactly what happened in the beginning, they noticed they suffered the most from Hex pressure teams, so they kept tweaking the build for Hex resistance. Ultimately, they ended up adding Expel Hexes and replacing a few Resurrection Signets with Hex Breaker.

After the modifications were complete, they took Ritualist Spike into GvG, and immediately saw that something wasn't right. Opponents would usually split when they saw the Ritualist Spike. Because eE had only one Vital Weapon, they'd lose all spiking ability in one of their split teams. Now they run with two Vital Weapons to allow splits and still be as deadly as a full team of eight.

Last season, during a match on Warrior's Isle, the Electronic Empire was having a hellish GvG fight at the flagstand. Both teams were spiking very fast; at around minute 15, eE crumbled and retreated to their base, where they turtled until minute 24. Then they rushed the enemy Guild Lord, leaving six players to body block the enemy gate while two Warriors killed the Guild Lord. It was a close match for them, but shows that alternative tactics can win where spikes fail.